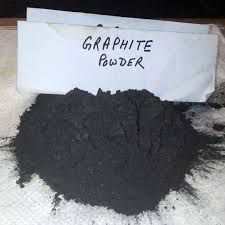 Graphite is a mineral composed exclusively of the element carbon. Graphite has the same chemical composition as Diamond , which is also pure carbon, but the molecular structure  of Graphite and Diamond is entirely different. This causes almost opposite characteristics in their physical properties.

Graphite is rather common mineral, but fine crystals are rare. Most Graphite mining areas produce enormous quantities from a single or several large Graphite vein s, but collector specimens in good crystals are not commonly encountered.

Much care should be given to Graphite specimens, especially thin crystals, which are fragile. It may be difficult to wash crystals, as they easily peel off and get ruined. Graphite will also smudge on its surface, and can get worn out if it is moved around too much. It also smudges the hand when handled, and will smudge a label or cardboard box if stored in one.
Contact the seller
Graphite