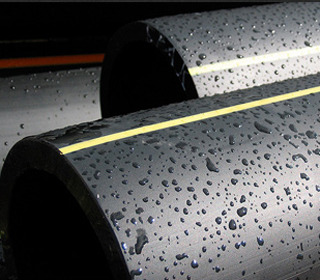 Pipes from polyethylene for gas pipelines

Way of receiving: by method of continuous shnekovy extrusion.
The plant makes pipes from polyethylene for the underground gas pipelines transporting the natural combustible gases intended for industrial and household use. Pipes are issued from import polyethylene of the RE-80, RE-100 brand.

In a type of an otsustviye of production of PE of raw materials for gas pipelines in Uzbekistan, pipes are issued from import RE-100 polyethylene. Pipes are made according to the maximum working pressure depending on the RE type and coefficient of margin of safety "With" chosen at design of gas-distributing pipelines from a row R-20 taking into account service conditions.

Pipes with a diameter of 63, 75, 90 mm make in direct pieces and bays, and pipes with a diameter of 110 mm let out only in direct pieces also above. Length of pipes in pieces from 5 to 24 m with frequency rate of 0,25 m. In coordination with the consumer production of pipes of other length is allowed. Color of pipes black or black with the yellow longitudinal marking strips in number of 4 pieces which are evenly distributed on a pipe circle.
Pipes are transported by any kind of transport according to rules of transportation of goods.
Pipes store under a canopy or indoors where fluctuation of temperature and humidity of air not significantly differs from fluctuation in the open air. Storage of pipes on the open areas no more than 6 months is allowed.
Warranty period of storage - two years from the date of production.
Service life of pipelines of 50-80 years.

Contact the seller
Pipes from polyethylene for gas pipelines