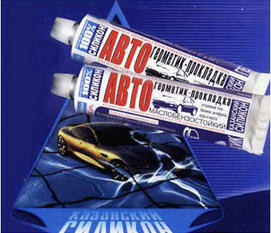 In stock
Reconfirm the price with seller
Call
Seller
Dioksid TOO
Kazakhstan, Karaganda
(View map)
+7(7
Display phones
10
10 years on Allbiz
Quickly responds
Description
Autosealant laying and autosealant laying of maslobenzostoykiya
Represents pasty composition from white till light gray color, capable at expression from tuba to be vulcanized at ambient temperature with formation of rubber - like material.
Temperature band of operation of sealant from - 50 * C to + 300 * C.
Autosealant laying is intended for elimination of leak of water, antifreeze and oil in demountable connections instead of cardboard, pith and rubber gaskets, and also for sealing of thinnesses. Possesses ability to be vulcanized on air, passing from pasty into rubber - like state.
Autosealant laying of maslobenzostoykiya is intended for use as laying of oil case, the pallet on the block of the engine of case, the drive of the mechanism of coupling, cover of shaft of the lube pump and cover of head of the block of cylinders, laying on water and gasoline pumps, for elimination of leak of water, antifreeze, gasoline, and also for pasting of glass, plexiglas, tree, concrete, sealing of threaded connections, fastening of tile to panels.
Technical characteristics of autosealant laying:
Viability of paste after expression from tuba, min. 5 - 120
Anchoring strength with metal during the flaking, kN/m, not menee1.
Technical characteristics of autosealant laying maslobenzostoyky:
Viability after expression from tuba, min. :
a) on film, not menee5
Shore hardness And, conventional unit. , not menee40
Change of mass of sample on its exposure in mix izotkan: toluene, taken in the ratio 7: 3 at 20 + 5 * C within 72 hours, % , not bolee65
Change of mass of sample on its exposure in M - 8B oil
within 72 hours at temperature of 20 + 5 * C, % , in predelakhot - 7 to + 5
To clear and degrease the pressurized surfaces, to apply sealant and in 40 - 50 min. to collect node, operation can be begun in 6 hours.
After application it is dense to tube to close.
Sealants are delivered in alyuminevy tubas with a capacity of 75 g and 200 g.
Warranty period of storage - 12 months.
Similar company products
Contact the seller
Autosealant laying and autosealant laying of maslobenzostoykiya Karaganda