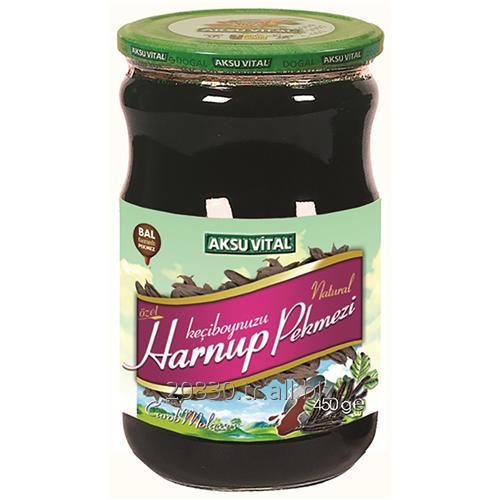 Middle Easterners often make the thick, sticky syrup known as molasses and grapes from Carobs. The healthy components extracted from thes fruits include disease fighting antioxidants, vitamins and minerals, According to Organic Facts. Among several potential benefits, grape molasses may help restore iron in anemic people; and a compound in carob molasses may benefit those with chronic obstructive pulmonary disease. Consult your doctor before using carob or grape molasses to treat any condition.

Consuming grape or carob molasses on your morning pancakes may provide your withe beneficial nutrients and natural chemicals to improve your health. For instance, the juicy part of the grape, used to make molasses, contains vitamins, including A, C and B6, along with minerals such as potassium, calcium, iron and magnesium. Carob molasses contains minerals and vitamins including riboflavin, vitamin A, calcium, iron, phosphorus and potassium. In addition, Carobs are 80 percent protein, According the to the Australian National University. Grape and carob molasses containers.Payment of phytochemicals, or plant chemicals, that may act as antioxidants to destroy DAMAGING Free Radicals cell in the body.

The carob tree fruit Extracts of the carob molasses provice antioxidant effects and may help kill cancer cells. A study published in the March, 2011 edition of the journal "Plant Foods for Human Nutrition" Examined the antioxidant and cancer cell germ-fighting effects of carob tree flower extract. Researchers Determined that carob flower Extracts were rich in phenolic compounds, or natural plant compounds, and had considerabl the antioxidant and cytotoxic abilities reducing the ability of cervical cancer cells to live. In addition, scientists discovered that the most prevalent antioxidant compound in carob germ tree flower is theophylline. Although the observations appea is positive, additional clinical studies are necessary to conclusively prove the effectiveness of carob antioxidants for the treatment of cancer.

RESPIRATORY BENEFITS
The theophylline from carob fruit Extracts, as in carob molasses, Potentially benefit people suffering from a group of lung Disorders, including chronic asthmatic bronchitis and emphysema, known as chronic obstructive pulmonary disease, he copd.ov is a one year period, 110 Participants with COPD received either 100 mg of slow release theophylline or a placebo. Subjects receiving theophylline experienced fewer episodes, clinical exacerbations and had fewer visits than those taking a placebo. Scientists that concluded that low dose oral theophylline is an effective and well tolerated treatment for long term stable COPD; however, additional scientific information is needed to conclusively prove the effectiveness of carob Extracts for the treatment of COPD.

Sesame Tahini, is made from mechanically hulled (no chemicals) Latin American sesame seeds. Use this pure, creamy, delicious tahini as a spread on pita bread and for making dressings.