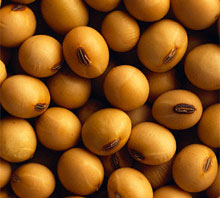 Soy from the producer. We work for EXPORT. WHOLESALE. To order in Kiev

Soy - a plant from family bean, considered as one of the most ancient plants cultivated by mankind.

Soy contains a significant amount of sugars — raffinoza and stakhioza which as a source of nutrients use bifidobacteria. With increase in quantity of bifidobacteria in an organism the risk of a disease of cancer and dysbacteriosis decreases, the quantity of harmful bacteria decreases, and also life expectancy in general increases.

Soy - an ideal product for vegetarians as for 40% soy consists of proteins, to the proteins of an animal origin which are not conceding on the qualities thanks to what is fine alternative to products of an animal origin. Soy has a wide range of application in cookery: it is used as the main substitute of meat, from soy prepare numerous soy products and drinks. Carry soy flour, various sauces, soy meat, cheese (tofu), sweets and even milk and oil to the main soy products.

However, scientific researches showed that consumption of soy in significant amounts has a number of contraindications as can lead to development of some diseases, in particular, to insufficiency of function of a thyroid gland at children, and also to growth stop. It became clear that soy proteins lead to hormonal changes of an organism. In this regard soy is contraindicated to pregnant women. The use of soy in large numbers can also provoke urticaria, rhinitis, dermatitis, asthma, a bronchospasm, diarrhea, colitis, conjunctivitis, eczema and other diseases. Inclusion in a diet of soy products can also do harm to kidneys, especially if the person already has an urolithic illness. The matter is that salts of oxalic acid — oxalates which serve as initial material for formation of uric stones are a part of soy.

soy
Contact the seller
Soy from the producer. We work for EXPORT. WHOLESALE. To order in Kiev