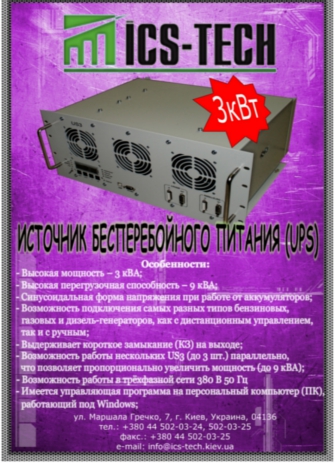 §высокий Efficiency during the work from accumulators - to 90;

§синусоидальная tension form during the work from accumulators;

§возможность connections of the most different types petrol, gas and diesel generators, both with remote control, and with manual;

§есть possibility of automatic periodic training start of the generator;

§большой accumulator charging current - to 35 A;

§есть temperature compensation of tension of a charge of accumulators;

§реализован three-stage algorithm of a charge of accumulators;

§ maintains the short circuit (SC) at the exit;

§возможность works of several US3 (to 3 pieces) in parallel that allows to increase in proportion power (to 9 kVA);

§в the three-phase mode on each phase parallel connection of several inverters is allowed (to 3 pieces), at the same time total power turns out 27 kVA;

§имеется the operating program on the personal computer (PC) working under Windows;

§ведётся the accounting of operating time of the UPS, the energy generated by it and the number of losses of a network;