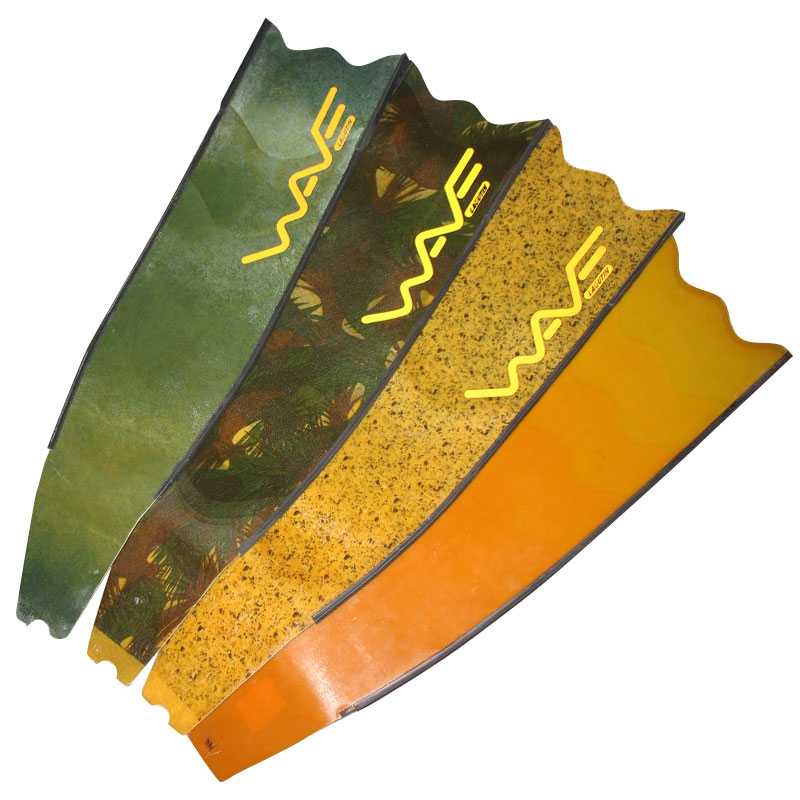 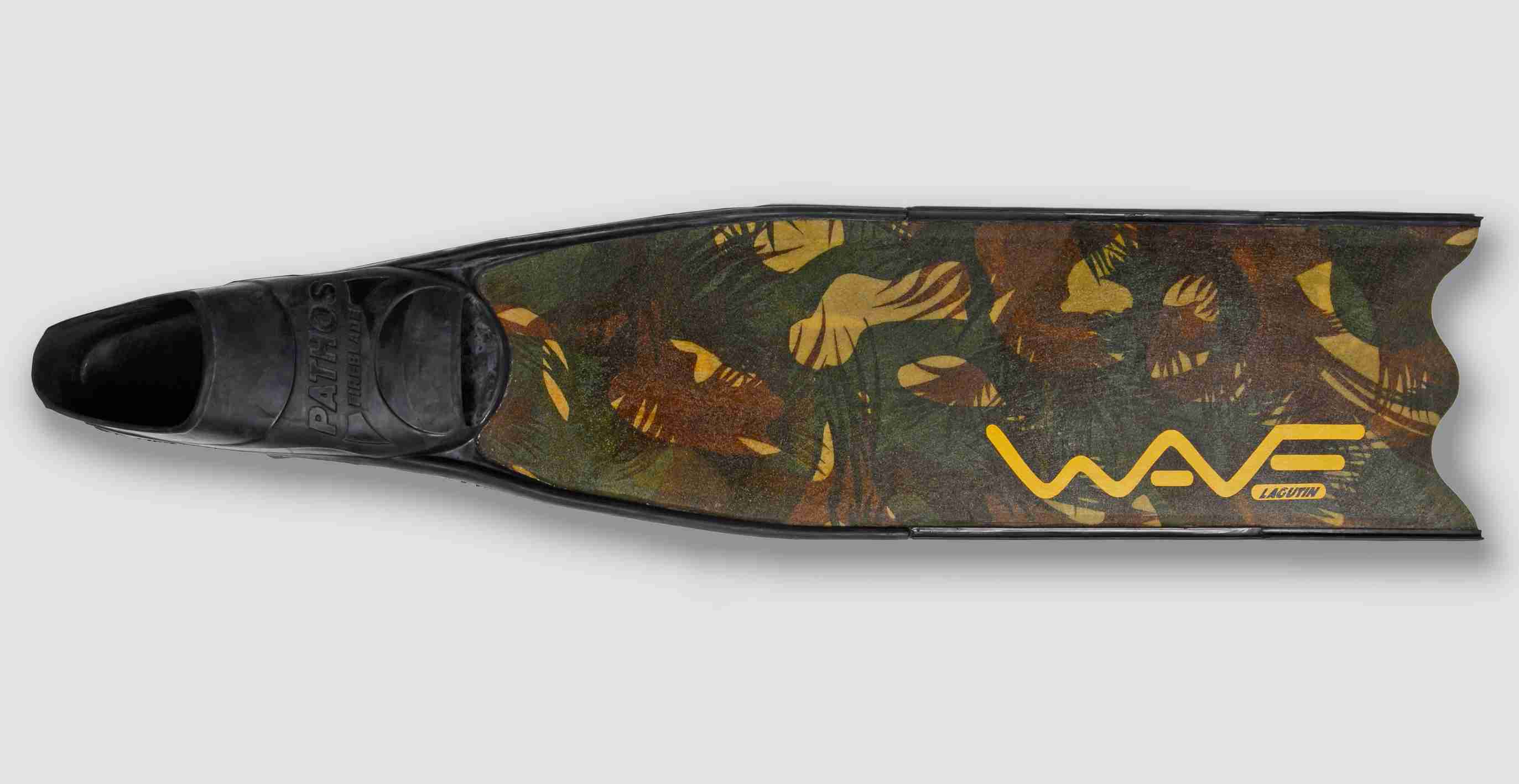 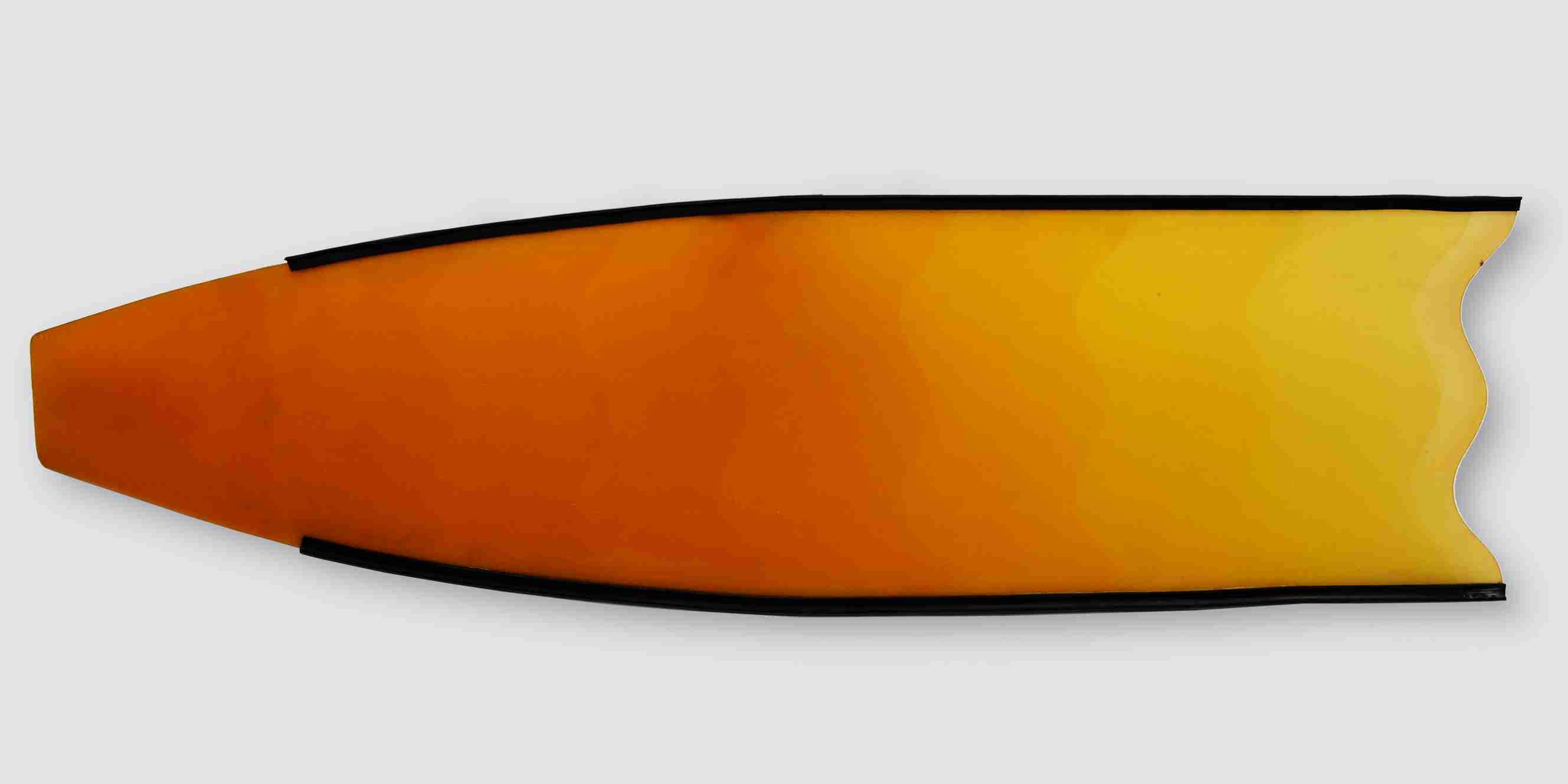 10 - 15 years ago, the underwater hunter in long flippers, looked and it is surprising and strange. And today, also strange happens to meet the hunter in short diving flippers. Moreover, even divers, now in increasing frequency apply long hunting flippers.

Everything flows and changes and now, to get long, ordinary hunting, flippers both simply and rather cheap.

Lasta consists of a galosh, is more often than a rubber or rezinoplastikovy and working plate which actually and is lasty. A plate, being bent at the time of a grebk, pushes water and by that serves as the propeller for the diver. Longer plates, at the expense of longer "shoulder" have also the big area of the pushing surface.

The plate profile - the radius with which it is bent is of great importance too! An optimum profile - a parabola, more flat at a root flippers and more abrupt at a tip. Distant, trailer part of a parabola also pushes the swimmer.

Lasta is the accumulator of the energy attached to its bending and which it gives in the finishing phase of each grebk. The more reaktivn a plate (it is instantly and completely unbent with the same effort with what it and bent), the better.

Plates from carbon fabrics and fibreglass - the most jet, and plastna from thermolayers most "sluggish".

In some models, plates are made as a single whole with a galosh, but in most cases, it is a folding design and to replace plates with others, is not difficult at all.

The same who treat hunting and diving more seriously and responsibly, for a long time, replaced plastic or polycarbonate plates on fiberglass, or more expensive, but also more fragile - carbonic.

Priorities are clear and clear. It is necessary to reduce energy losses, to increase efficiency, efficiency or speed of each dive.

Only the fiberglass, carbonic or combined composite plates allow hunters and freedivers to move in water most effectively and economically.

Each producer approving unconditional advantages of plates to flippers, the production, offers divers various lines of rigidity of plates. As a rule marking looks as follows -

Unfortunately, the main problem that all this both was and remains words and it is possible to compare two couples of plates only to the touch. And that, at the known experience. And to choose for itself plates which, meeting your requirements: to sports preparation, temperament, suit thickness, your weight and weight of a gruzpoyas, area of hunting, season and style of swimming. For certain you will be arranged, it is necessary to test very much and different.

Today, rather strict system of testing of plates is developed. Certainly, in the final defining all the same will be style of swimming, working depths and water temperature in a reservoir. In a cold season of a plate from cast thermoplastics, become exclusively rigid, and at times and just fragile. Plates from thermolayers, to all other, also very "sluggish", "viscous" - they do not give more than 20 - 40% of the energy spent for their bending on a fungus. And it means that the hunter, for hunting, it is useless spends 30 - 50% of the energy!!! In order that correctly and objectively to test plates. A series of video filming of work of various last which used different in level, to experience and sports preparation hunters and freedivers was carried out.

As showed experiments, during a grebk, the plate flippers is bent approximately at 30% of the length. Means, quite logical will be to assume that, having measured effort which it is necessary to make for a plate to bend it for 30% we, most likely, will receive quite strict test value of rigidity of a plate.

The second, not less important criterion, the blade bend profile is.

The third criterion, or is more true the factor influencing efficiency of a grebk there will be a rigidity of "moustaches" and all galosh in general.

Further, already questions of technology of swimming - a long fungus, a short fungus, a wide step, a short step, sliding, zakhlest a shin and an ankle.

For a start we will measure rigidity of standard thermoplastic plates of the most famous producers:

For most of hunters plastic plates with rigidity 2,5 - 3,5 kilograms though quite on forces, but are all the same hardish and demand bigger tension. Thermoplastic accumulates in itself the lion's share of energy of a grebk, and big rigidity of a plate increases load of foot. In a consequence of what, efficiency of a grebk zamtno falls.

Fiberglass and carbonic plates: Due to elastic properties of fibreglass and a coal plastic, plate of last collected on epoxy or polyester binding (pitches), possess magnificent elasticity and reactivity (completely give the energy enclosed on their bending). The plate composite flippers is gathered from layers of fibreglass or a coal plastic (carbon fabrics) consistently and with shift laid in a sendvich-package and impregnated binding. At a root (around a galosh) the plate is thicker and more rigid, and to a tip its thickness respectively decreases. Depending on plate thickness, also rigidity respectively changes. At the same time rigidity of a kakzhdy separate layer of fibreglass is much less than rigidity of carbon fiber-carbonic fiber. Therefore, gathering a plate from bigger quantity of layers of fibreglass, as a result, we can receive smoother and rational profile of a bend of a plate.

For this reason, some producers gathering a sandwich - a plastna package, external layers do carbonic, and in a package stack fibreglass. Moreover at the same time a plate being fiberglass externally inside remains carbonic, so and more expensive.

Considering elastic properties of fiberglass composites and a large number of layers in a sandwich - a package it is possible to receive plates with in advance put and predicted characteristics. In the course of experiments it became clear - composite plates with test values above of three kilograms are already too rigid for the majority even if very well trained hunters. Moreover, it turned out that most of divers simply are not able to swim correctly and at the expense of it, are not able to realize those chance which more rigid plate gives them. So for example in a surf and on a strong current, only the rigid plate is able to give to the athlete that sharp and powerful impulse which is necessary for them at present. Beginning a fungus from a knee to force a lasta to work, they are forced to involve actively in work an ankle and by that, to strain the bigger number of muscles. Lasta seeks to descend from foot and the galosh begins to dangle and creak. For this reason, it is better for such hunters to change speed and force of a grebk, and having applied softer plates thus, to make the swimming more effective.
So for example, Greek hunters. In Greece - spearfishing dear and popular sport. Sea around, and water transparent and warm. And it gives the chance to be engaged in hunting almost all the year round. In many respects, probably for this reason, hunters swim very incorrectly from the point of view of technology of swimming. There is no time to study....! But, they quite compensate these shortcomings, magnificent delays of breath, extensive experience and an opportunity to be engaged in this sport all the year round. In Greece the type of diving - Skandalopetra was born when the diver plunges deeply, holding the stone attached to a rope. Diving with freight allows to save forces at the time of immersion and to use the minimum weight of ballast on a body of the diver. So and to save energy applying flippers softer. At the same time without loading excessively a muscle of legs! Especially it becomes noticeable for those who are forced to float sometimes big distances, diving at the same time not especially gluboko:10-15 meters. As well with depth until the suit thin and freight is picked up correctly, at slow diving everything is good and soft plates "extend". But costs a situation though slightly to change: freights were added or lowered, put on thicker suit, it is necessary to operate on a current or in a surf, it is necessary to emerge from depth with large fish or to dobuksirovat to the coast of the victim. Here any will think of flippers more rigidly. So for example in northern Spain, Portugal and France where it is necessary to hunt often in 6 - 7 mm suits, in a surf and on a current. Hunters apply rather rigid plates. And in the conditions of winter hunting when the hunter dives in the 9-10th suit and to it it is necessary to overcome positive buoyancy of 3-5 kg at the time of a dive and same but already negative, on emersion. Here rather rigid plates are necessary. One more nuance - length. Longer flippers are and longer lever, it and the big area of a plate and for longer flippers and the profile and rigidity of a plate begin to differ in the values. As a result, besides such subjective, but quite correct and correct assessment of rigidity - "to the touch", "approximately" and "on feelings", there is actual also a binding to digital values. It is possible to measure plate length, and for flippers assembled, length of a plate is limited as a rule to the first third of length of a galosh. Having plate length - we fix an elektornny dynamometer at a root flippers (a plate shaft) and having bent a lasta at 30% of length, we write down the value of rigidity expressed in kilograms. The most objective, measurement will be when the lasta is suspended vertically, a shaft or a galosh up and a tip flippers down.

Flippers the WAVE models are produced in several options of rigidity.

No. 1 Soft flippers for beginners, children and hunters with a small weight (to 70 kg)
Test value of rigidity 1,2kg. The softest in this series 0,9kg, and the most rigid - 1,5 kg.

No. 2 Amateur plates for the hunters with a brief experience of hunting using usually thin suits and hunting in the sea or forced to float long distances without diving deeply. The magnificent choice for the girls and hunters diving with a variable weight.


No. 3 Sports series. Suit most of the trained hunters and freedivers. Perfectly work both in the sea and in the river. At average and big depths.
Test value - 2,6kg. In This line, the softest - 2.3kg. and the most rigid - 2,8kg.

No. 4 PRO professional series. Rather rigid plates for well trained and trained hunters. The ideal choice for hunting in cold water, on a current and in a surf.

Contact the seller
PRODUCTION of "APNOS" Flippers of the APNOS WAVE Blade No. 3; 4; (Length 770mm) stekloplas