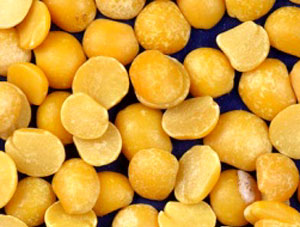 Polished split peas (hulled) is developed from food peas by removal of its seed cover and a peeling.

Polished split peas is the divided cotyledons with a smooth or rough surface and with the rounded-off edges. Impurity of the whole peas in it no more than 5%, color yellow - peas of other color is allowed no more than 7%. There are 1 and 2 grades - at our enterprise split peas of 1 grade is developed.

Polished split peas - the most ancient cultural plant. It counts the age since bronze and stone centuries - already then it was cultivated by the people of Asia Minor.

The peas seeds found archeologists in the Chernivtsi and Ivano-Frankivsk regions of Ukraine are dated the period of the third millennium B.C. The most "ancient" seeds of peas - from the late Stone Age (over 20 thousand years ago) - are found in Greece (Thessaly), Croatia, Switzerland, West Germany (Wurtemberg), Upper Austria.

Polished split peas was considered as the major foodstuff in Ancient Egypt, in East Africa and India, grains of peas are found at excavation of Troy, appreciated it at the time of Homer. Peas were one of the first European plants which colonists planned to grow up on the American continent where it was delivered by Christopher Columbus.

Peas dishes were obligatory in the menu of the English kings (including and the queen Elizabeth).

Honor peas protein content same, as in meat, eggs and milk (23%). The amino-acid composition of protein of peas differs in contents almost everything, necessary for the person, irreplaceable amino acids, including the high content of a lysine, cystine, tryptophane, an arginin and methionine.

Polished split peas is rich with mineral substances: potassium, magnesium, calcium, phosphorus, sulfur, zinc, nitrogen, iron - all these substances help our organism to cope with many illnesses and infections. They participate in blocking of receipt in an organism of radioactive minerals.

In peas group B vitamins which together with an inositol and well-cared (and in their peas much) play an important role in a metabolism are almost ideally balanced, preventing aging and a sclerosis, strengthen nervous and immune systems (a shortcoming it is well-cared, according to some information, leads to growth and development of malignant tumors).