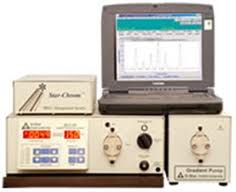 DQS-200 and DQS-200P(high pressure) Features- The DQS-200 (note: any reference to DQS-200 refers to the DQS-200P as well) is an automated, Quaternary gradient HPLC system with a variable wavelength detector. The DQS-200 incorporates the D-Star HPLC system, the Star-Chrom TM HPLC Management software for full data acquisition, data processing, and instrument control.

Pump- The pumping system is four single piston pumps. All pertinent information on the pump, and its

controls, will be found in the specifications below.

Detector- The detector is the D-Star Model DVW-10 variable wavelength detector. It has an operating range

acquisition when a manualinjection is made.

Pressure Transducer- The pressuretransducer, which is mounted internally in the pump module, is

external Interface Box. The pressuretransducer is a standard item in the

DQS-200, Setting of system pressure alarms in the method file of the software is part of the method

Gradient Systems. It is a Windows 98/XP or NT/2000 32 bit based, dual channel software that provides

creating and storing methods, acquiring, processing, and calibrating the data in an internal database,

performing single or batchruns, controlling the pump(s), and detectors (including setting the wavelength of a

auxiliary valves for recycling expensive solvents, and setting high-low pressure alarms built in as a safety