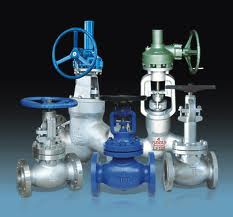 Products from producer
In stock
Reconfirm the price with seller
Connexion International, Company.
Pakistan, Karachi
(View map)
+92
Display phones
Call
Products of other enterprises
Technical characteristics
Description
We have all size and all brand in it like Econ,kitz,Crane and ect


The body is the main pressure containing structure of the valve and the most easily identified as it forms the mass of the valve. It contains all of the valve's internal parts that will come in contact with the substance being controlled by the valve. The bonnet is connected to the body and provides the containment of the fluid, gas, or slurry that is being controlled.

Globe valves are typically two-port valves, although three port valves are also produced mostly in straight-flow configuration. Ports are openings in the body for fluid flowing in or out. The two ports may be oriented straight across from each other or anywhere on the body,[5] or oriented at an angle (such as a 90°).[6] Globe valves with ports at such an angle are called angle globe valves. Globe valves are mainly used for corrosive or high viscous fluids which solidify at room temperature. This is because straight valves are designed so that the outlet pipe is in line with the inlet pipe and the fluid has a good chance of staying there in the case of horizontal piping. In the case of angle valves, the outlet pipe is directed towards the bottom. This allows the fluid to drain off. In turn, this prevents clogging and/or corrosion of the valve components over a period of time. A globe valve can also have a body in the shape of a "Y". This will allow the construction of the valve to be straight at the bottom as opposed to the conventional pot type construction (to arrange bottom seat) in case of other valves. This will again allow the fluid to pass through without difficulty and minimizes fluid clogging/corrosion in the long term.