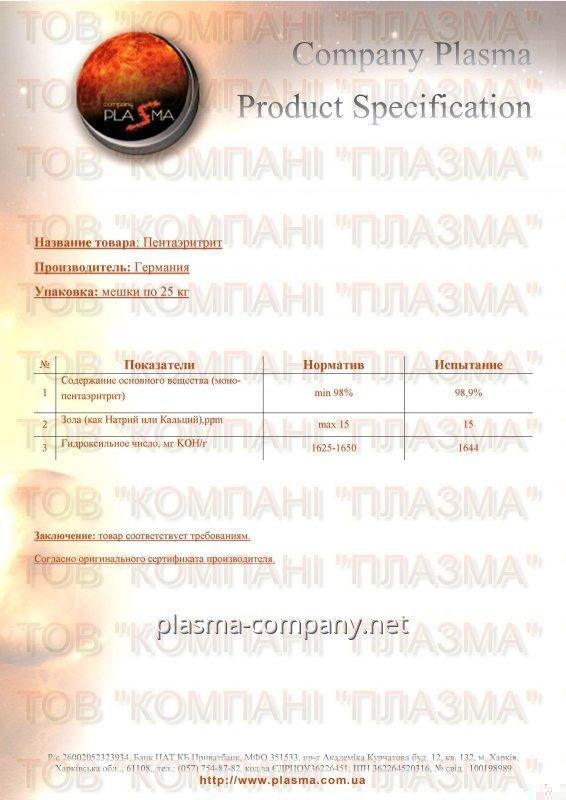 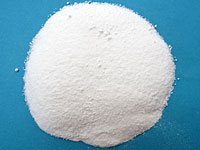 Pentaerythritol represents white crystal powder with sweet taste. Is tetratomic alcohol of an aliphatic row, we will well dissolve in glycerin, in water, it is practically not dissolved in usual organic solvents. Pentaerythritol - the multipurpose nontoxical product which is not forming toxic connections with other substances both in the air environment, and in sewage.
Temperature of melting is 268 °C, temperature of boiling is 276 °C.

The industry receives pentaerythritol according to the so-called "formiatny" production technology - interaction of formaldehyde with water solution of ethyl aldehyde in the presence of the alkaline catalyst with the subsequent reaction of Kannizzaro between formaldehyde and formed pentaeritrozy.

Pentaerythritol is widely applied in paint and varnish industry to production of polyair, first of all to synthesis of alkyd resins, pentaphtol varnishes and enamels, production of printing paints, as a component of polyurethane paints for receiving substances in the textile industry, in production of synthetic lubricant oils, pentalayer, softeners, stabilizers and antioxidants to polymers, and also to synthesis of the surface-active substances (SAS). Tetranitropentaeritrit, known also under the name TEN, it is used in production of explosive materials.

Depending on a way of production and a scope pentaerythritol is let out two brands: And yes B. Pentaeritrit of brand A (a grade the highest and the first) is intended for production of paints and varnishes and printing paints, brand B (a grade the highest and the first) - for production of pentalayer. lubricant oils and for a nitration. Pentaerythritol of brands A and B can be used also for other purposes.

Packing, transportation and storage.
Pentaerythritol is packed into five-six-layer bags or three-layer paper bags with a polyethylene bag insert, or by the three-layer paper bags enclosed in bags from water-proof fabric.
The pentaerythritol packed into bags is transported packages in the covered vehicles car sendings and in large-capacity containers the railway or motor transport according to the rules of transportation of goods existing on this type of transport.
Pentaerythritol is stored in the closed, dry, pure room on the pallets remote from a floor not less than on 5 cm and from heating devices not less than on 1 m. Storage of the pentaerythritol packed into containers on the open areas under a canopy or without it with additional protection against an atmospheric precipitation on the pallets remote from the earth not less than on 5 cm is allowed.
Warranty period of storage of a product - 1 year from the date of production.