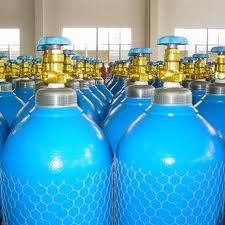 Broad industrial use of oxygen has begun in the middle of the 20th century, after the invention of turbodetander — devices for liquefaction and division of liquid air.

Converter way of production became or processings of mattes it is connected using oxygen. In many metallurgical units for more effective fuel burning instead of air in torches use oxygen air mixture.

Welding and cutting of metals

Oxygen in cylinders is widely used for oxy-cutting and svarkimetall.

Oxygen is used for enrichment of respiratory gas mixtures at breath violation, for treatment of asthma, decompressive illness, prevention of hypoxia in the form of oxygen cocktails, oxygen pillows.

In the food industry

In the food industry oxygen is registered as food dobavkiye948 [6] as propellant and packaging gas.