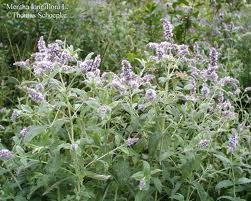 Perennial grassy plant. The rhizome is underground, horizontal, branchy, with reinforced knots which leave bunches of thin additional roots. Stalks up to 1 m high, tetrahedral, reddish, naked. Leaves are opposite, petiolar, ovoid lantsetnye or oblong, with integral, not clear pilchatoy a plate, dark green from above, lighter from below. Flowers in the verticils collected in a kolosovidny, oli-stvenny inflorescence, pink, almost correct with bracts. A fruit from four nutlets, smooth, reddish-brown. Blossoms in July — August.

Medicinal raw materials are leaves, a grass and essential oil. The raw materials gather during blossoming, dry on air in a shadow, on attics or under a canopy. It is stored in the dry place.

Leaves and stalks of mint contain the essential oil consisting of menthol, a menton, pinene, a dipenten, a fel-landren, a tsineol, a pulegon, a zhasmon and air of menthol of valerian and acetic acids. Contain in leaves also carotene (to 40 mg of %), gesperedin, a betaine, a remnoza, glucose, ursolovy and mellisinovy, linoleic and oleano-Lowai acids.

Peppermint leaves for receiving essential, mint oil and menthol, and also in pure form as a part of collecting and for preparation of infusions and tinctures are used.

Preparations of a peppermint are a part of validol, Corvalol, valocordin, Zelenin's thaw which are applied at the diseases which are followed by spasms of coronary vessels, smooth muscles (hepatic, renal, intestinal colic, nausea, unrestrained vomiting, seasickness).

Menthol in mix with vaseline (vaseline oil) is applied at rhinitises, meningitis, pharyngitises; in mix with paraffin — in the form of pencils for rubbing in at migraine.

In the Chinese medicine as zhelchegonny, carminative, anti-inflammatory, deodorizing, sudorific and mestnoanasteziruyushchy the mint preparation is applied; the grass of mint is mentioned as "an eye grass"; its oil is recommended for washing of eyes.

In traditional medicine mint is applied to treatment of heart, pulmonary diseases, especially after bleedings from lungs as a sedative at nervous (morbid depressions, hysteria) as strengthening at a breakdown. Broth of a grass is drunk at belly-aches, a diarrhea, cough, heartaches, nausea, heartburn, chronic nephrite in combination with other medicines, at cholera, rheumatism as means diuretic, sudorific, anti-cold and satisfying a toothache. In the form of water hot infusion apply as calming, anticonvulsive and improving appetite means. The peppermint is used at gastritises, at the increased gastric acidity. In such cases apply collecting: peppermint leaves — 15 g, a bobovnik — 2 g, yarrow flowers — 15 g, fennel seeds — 15 g, a St. John's Wort grass — 30 g. Two tablespoons of mix fill in with 2 glasses of boiled water, 2 hours soar, filter and accept during the day drinks.