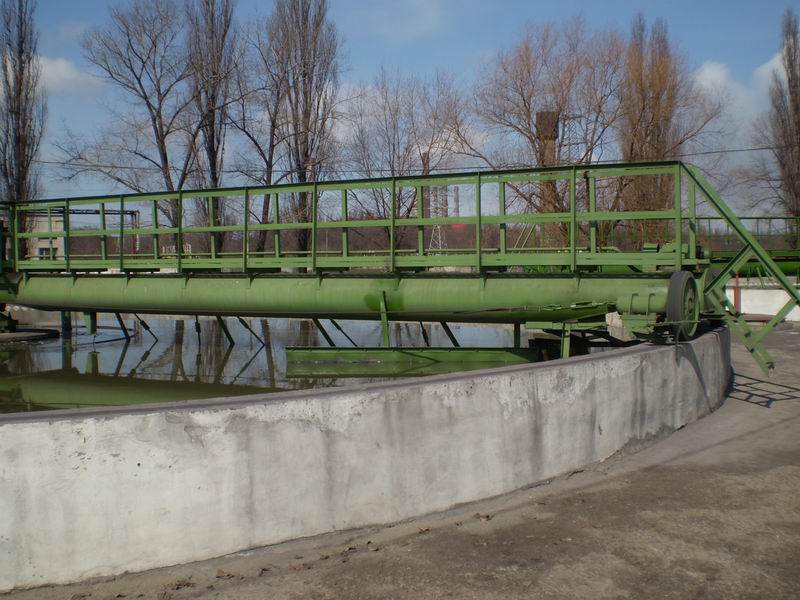 Iloskreb M593 with a diameter of 18 m for radial primary settlers, are intended for systems of mechanical sewage treatment.
Iloskreba are applied to sweeping of the deposit which is dropping out on a settler bottom to the central priyamk from where he leaves through system of the taking-away pipes. For collecting floating substances in a settler the special device for removal of floating substances is installed along with iloskreby.

Device and work of an iloskreb.
Iloskreb represents the mechanism consisting of the following main knots:
— bridge; — scrapers;
— a running gear assembled — support central;
— reflector; — traverses;
− scrapers of a ground trench, drafts and extensions.
The external end the bridge leans on a running gear. Other end the bridge leans on a support central, strengthened in the central part of a settler.
The bridge together with the drive rotates around a support central.
The working body of an iloskreb which is raking up a deposit in a settler is the spiral scraper which by means of bars and couplers is suspended to the bridge.
On the bridge, besides a spiral scraper, it is fixed a traverse and the cylinder which directs a stream of the liquid coming to a settler. To a branch pipe traverses are suspended the ground scrapers which are raking up a deposit in the central priyamk of a settler.
Work of an iloskreb consists in the following:
From the motor reducer, established on a frame, the torque is transmitted through the tooth gearing to the leading skating rink moving on a concrete board of a settler. Together with the bridge rotates a traverse. The scrapers suspended to the bridge rake up a deposit on all settler and in a priyamka.
Food is transmitted to the drive by a tokopodvodyashchy cable through a slip ring ring.
The possibility of installation of the device for removal of floating substances is provided in an iloskreba.

Device and work upv
The device for removal of floating substances UPV consists of the reception bunker equipped with a float, the taking-away branch pipe, the lever with a cam and the shaking scraper. The float holds the bunker over the surface of liquid in non-working situation. During the work of an iloskreb, at the time of impact of a cam on a bunker guide, the bunker it is submerged, and waste liquid directs in the bunker, entraining floating substances which on a pipe get to the special receiver.