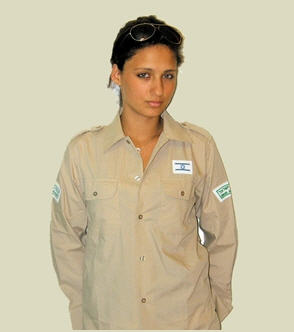 The Israel Boy and Girl Scouts Federation is Israel's national scouting organization, known in Hebrew as Tzofim. The scouts movement was founded in Palestine in 1920 and became a member of the World Organization of the Scout Movement in 1951, after the establishment of the State of Israel. The guiding movement was established in 1919 and became a member of the World Association of Girl Guides and Girl Scouts in 1963. Some 90, 000 boys and girls belong to Tzofim in Israel. Tzofim is a non - political organization but upholds Zionist and Jewish values. Scout troops in Israel have always been co - ed. The federation in Israel consists of Jewish, Muslim Arab, Christian Arab, and Druze troops.

Uniform including - Shirt only (Pants also available for sale).