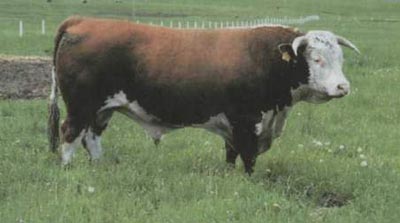 Gather - with pleasure we will answer all questions.
If out of an access zone (often we are in business trips) - leave the application.

Breed is created in England (county Hereford) in the first half of the 19th century by method of selection native cattle. Output cattle it was used as working and meat-and-milk. In formation of specialized meat breed the big role was played by outstanding manufacturers of Tomkins. Selection was directed to precocity, ability to give vent high lethal, marble meat. Color in breed was standardized - red with the white head, a pidgrudok, a stomach, legs and a brush of a tail. At such specialization received the early animals subject zhirovidkladen at young age, with rounded shapes of a body, the best grades of meat providing a high exit with a small share of bones.

Hereford are characterized by the strong constitution, unpretentiousness, ability to big transitions, resistance to a number of diseases, good acclimatization.

Breed is widespread in many countries of the world, especially in Canada, the United States of America, Australia, Argentina, etc.

Now in plemreproduktor and a plempredpriyatiya there are 653 heads, including 242 cows. In paruvalniya of a network use 20 bulls.