ALL.BIZ Products Aviation, Railway & Shipping Railway transport and components Permanent way components Materials and eqipment for track structure Elements of a fastening of the top structure of a railway way 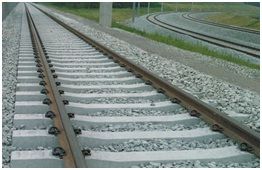 Fastenings are bespodkladochny elastic, the pozvolyayushchiya to reduce the level of vibration and noise. Are used on railway tracks in Ukraine and abroad.

These fastenings are intended for laying on direct sites and curve sites with a radius more than 350 m of jointless railway and tram lines with all types a rail on reinforced concrete cross ties with freight density to 50 million t gross/km in a year and speed up to 200 km/h.

The fastening has a number of economic and operational advantages: