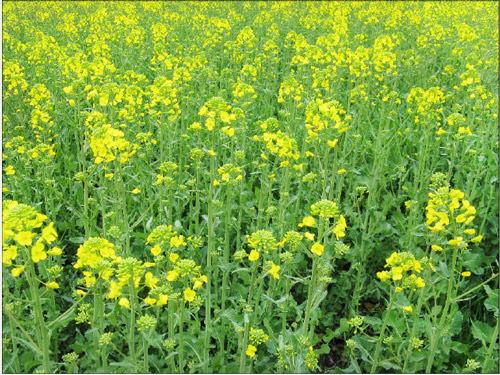 Colza - annual herbaceous plant with rod, thickened in upper part, the root, upright glaucous-green stalk which is divided into branches of the first and subsequent orders and petiolar next leaves from family Cabbage. For the fortieth day from seeding emergence on colza clustery friable inflorescences with yellow petals of which by the end of flying the bilocular superior ovary which is gradually transformed to the narrow, slightly bent pod containing about 30 rounded spherical small seeds of dark gray or brown coloring is formed are dismissed. The cultivated area of this oil plant in the world constantly increases, but most of all he cultivates in China, India, Canada, Ukraine and the European Union. As for the Russian Federation, production of colza in recent years also increased, and in our country are grown up mainly summer culture in connection with its bigger cold constancy.

The great interest for geneticists presents colza emergence, in the wild-growing form the plant does not meet, and the culture is known already over 6 thousand years. Scientists unanimously believe that colza resulted from crossing of cabbage of garden and winter wild cabbage, but concerning the place of its origin there are certain disagreements. The part of botanists carries colza to the Mediterranean center of origin of cultivated plants, according to the others its homeland is England and Holland from where it approximately in the 16th century extended to Germany, the Western Ukraine and Poland. Russia began to cultivate it much later, only by the beginning of the 19th century.

Colza - natural amphidiploid, that is prolific hybrid organism in which full diploid ranges of chromosomal material from both parent types are combined. And its selection continues in the main three directions now: fodder, food and technical. Selection is made for the purpose of yield increase high-protein and high-oilseeds, to acceleration of their maturing, increase in resistance to drowning, fall, cracking of pods, defeat by wreckers and diseases, stresses.

Green material, hay and grass meal from colza is used as forage to cattle, besides, the plant is fine pasturable culture for sheep and pigs as it is rich with sulfur-containing protein and quickly grows, reduces incidence of farm animals and increases exit of meat and wool. Colza - good green manure and magnificent melliferous herb, from one hectare of crops of bee develop 60-90 kg of whitish honey.

From seeds of colza receive the high-quality oil used in cookery for preparation of various dishes and in the food industry for production of margarine. Rape oil with large amount of erucic acid, harmful to organism, with success is applied in metallurgy to steel tempering, as greasing in reactive engines as raw materials for production of elastic materials. The direction of use of rape oil in production of the biodiesel, especially actual for northern areas is interesting. After oil pressing colza gives cake and meal, full-fledged on protein content, - valuable concentrated food in winter season and food basis of premixes and compound feeds.