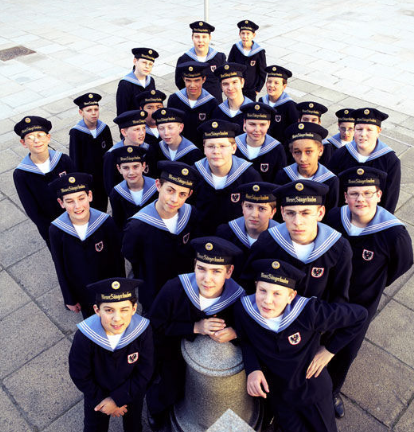 In 1498, more than half a millennium ago, Emperor Maximilian I moved his court and his court musicians from Innsbruck to Vienna. He gave specific instructions that there were to be six boys among his musicians. For want of a foundation charter, historians have settled on 1498 as the official foundation date of the Vienna Hofmusikkapelle and - in consequence - the Vienna Boys' Choir. Until 1918, the choir sang exclusively for the court, at mass, at private concerts and functions and on state occasions.

In 1918, after the breakdown of the Habsburg empire, the Austrian government took over the court opera (i.e. the opera, its orchestra and the adult singers), but not the choir boys. The Choir owes its survival to the initiative of Josef Schnitt, who became Dean of the Imperial Chapel in 1921. Schnitt established the boys' choir as a private institution: the former court choir boys became the Wiener Sängerknaben, the imperial uniform was replaced by the sailor suit, then the height of boys' fashion. Funding was not enough to pay for the boys' upkeep, and in 1926 the choir started to give concerts outside of the chapel, performing motets, secular works, and - at the boys' request - children's operas. The impact was amazing: Within a year, the Wiener Sängerknaben were performing in Berlin (where Erich Kleiber conducted them), Prague and Zurich. Athens and Riga (1928) followed, then Spain, France, Denmark, Norway and Sweden (1929), the United States (1932), Australia (1934) and South America (1936).

Today there are around 100 choristers between the ages of ten and fourteen, divided into four touring choirs. The four choirs give around 300 concerts and performances each year in front of almost half a million people. Each group spends nine to eleven weeks of the school year on tour. They visit virtually all European countries, and they are frequent guests in Asia, Australia and the Americas.

Together with members of the Vienna Philharmonic Orchestra and the Vienna State Opera Chorus, the Wiener Sängerknaben maintain the tradition of the imperial musicians: as Hofmusikkapelle they provide the music for the Sunday Mass in Vienna's Imperial Chapel, as they have done since 1498.

The choir is a private, not-for-profit organisation. The eight members of the choir's governing body oversee its development and guarantee its future. The current president is Walter Nettig. Gerald Wirth became the choir's artistic director in 2001.
联系卖家
Ienna Boy's Choir, China tour 2003