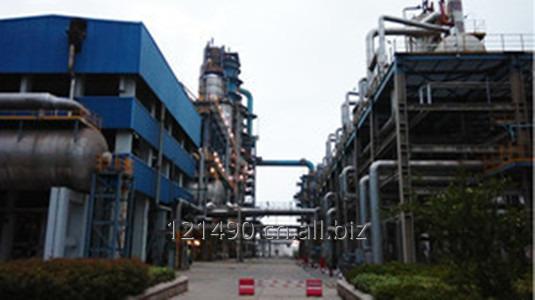 Trioxane is the most important monomer for polyacetal(POM) synthesis, POM production technology with trioxane as the copolymerization monomer takes 80% of the total POM capacity in the world. It is usually synthesized by enriching 37% formalin to about 65% and then by oxidation in presence of acid catalyst such as sulfuric acid. The production consists of formalin enrichment, trioxane synthesis, trioxane enrichment, extraction, light components stripping and heavy components stripping.

In trioxane production, one of the biggest problem is that a large amount of steam will be consumed by formalin enrichment and the treatment of diluted formalin generated from formalin enrichment. To solve this problem, SL TECH proposes to oxidize methylal into high concentration formalin(75%) directly instead of synthesis plus enrichment., and meanwhile the formalin generated from trioxane enrichment can be charged back to the methylal synthesis unit. In this way, a closed circuit system is formed. Also for those manufacturers with formalin as the only feedstock, SL TEC has the propriatary license to provide a special falling film vaporizer to enrich formalin to 78%-80%, and enrich the diluted formalin by-product by customized distillation.