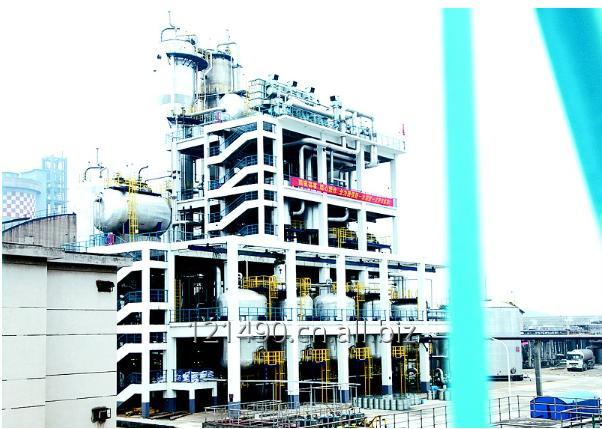 There are Several Methods for hydrogen peroxide Production , Among Them The AO (Auto-Oxidation) Process IS The MOST the prevailing One. The In the this Process, 2-alkyl Anthraquinone IS Mixed with Organic Solvent to the make up The Working Solution, Which IS Hydrogenated in Presence of catalyst, and the resulting is oxidized by air (or oxygen) in counter-current way before being extracted, regenrated, purified and enriched to get commercial hydrogen peroxideproduct. Depending upon the different reactor type in the hydrogenation unit, AO process is further divided Fixed Bed Process and the Reactor INTO Fluidized Bed the Reactor Process. SL Tec the Provides both-Processes. at The Fixed Bed Process the Reactor TEC SL  provides is the most advanced technology in China. It employs heavy aromatics-TBU-TOP tertiary solvent in the working solution and alumina-supported Pd catalyst with high activity.

Compared to the other Fixed Bed Ractor Process prevailing in China, the technology offered by SL TEC has advantages as below:

3.The Fenton oxidation method + biochemical treatment sewage technology has been successfully applied, so that the sewage of the hydrogen peroxide device is completely discharged after being treated.

4.System-wide air release for centralized recovery and disposal of the system. The unorganized exhaust gas is recovered and there is no odor on site. It not only reduces solvent consumption, but also improves the working environment and meets the requirements of occupational health and environmental protection acceptance standards.

5.The post-treatment drying column uses high-efficiency reaction and separation of filler packing. Solved the problem of causing alkali in the drying column. The burden on the subsequent activated alumina bed is alleviated. Reduced consumption of activated alumina. At the same time, it ensures the long-term operation of the system.

Note: The device operation flexibility is 60~110%.