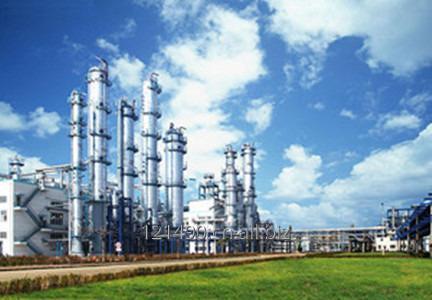 As the second monomer for polyacetal(POM) production,1,3-dioxolane has attracted great attention in recent years due to the expansion of its application, such as the solvent for grease, dyes, cellulose derivatives, polymers and etc, the stabilizer for trichloroethane, components of photosensitiser. There are usually two processes for 1,3-dioxolane production, one uses paraformaldehyde and MEG as the feedstock, while the other starts from concentrated formalin and MEG. SL Tech has been specialized in dioxolane production since 2008 based on concentrated formalin and MEG. In detail, in presence of concentrated sulfuric acid catalyst, enriched formalin and MEG reacts with each other @ 90-100oC atmospheric pressure, the resulting mixture is charged to Enrichment Unit, Extraction Unit, Heavy Components Distillation Unit and Light Components Distillation Unit in subsequence to get the finished 1,3-dioxolane product

Compared to the other route beginning from paraformaldehyde and MEG, the process SL TEC provides has advangages as below: