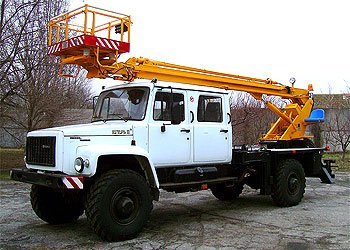 It is intended for rise on height to 14 m of working personnel with materials and the tool by production of repair, construction and other types of works, and also service of electrical units and power lines up to 1000B in the conditions of lack of a rain, snow, fog, hoarfrost.


Modifications of the AP-14 car lift

The car lift telescopic with height of raising of a cradle to 14 meters:

The car lift is manufactured according to technical to an usloviyamt U 34.1-00240106-024:2006.
The car lift is manufactured in a climatic modification At, categories of placement 1 in accordance with GOST 15150 for work at temperatures of air from 233K (minus 40 °C) to 313K (plus 40 °C) and wind speeds no more than 10 m/s at the height up to 10 m.
The car lift is mounted on the car 2322BF of the increased passability of type 4x4. The car is not exposed to additional completion. By means of angular arms and bolts to a frame of the chassis the basic device with portable support which provide stability of the car lift during the work fastens. Control of support is exercised from the panel located on the right side of a platform. On a frame of the basic device the support rotary external gearing, integrated with a worm reducer is established. To a support the frame rotary on which the arrow with a working platform (cradle) is sharnirno fixed fastens, necessary hydromechanisms, and also the control panel by an arrow and the operator's seat are placed.
The arrow consists of two sections connected among themselves telescopicly. The cradle is established on four porcelain insulators. For the purpose of reduction of height of the car lift in transport situation a handrail of a cradle is executed by developing. The watching system of the car lift forcibly holds a cradle floor in horizontal position at any tilt angle of an arrow.
In transport situation the arrow settles down along the chassis over a cabin of the driver and leans on a rack.
The car lift is equipped with all necessary light devices and has safety coloring according to requirements of Traffic regulations. Power supply of in addition installed devices is carried out from the power supply network of the basic car.
The limiter of limit freight carries out shutdown of the hydroequipment of lifting and rotary part of the car lift when loading a cradle weighing more than 220 kg (110% of nominal loading capacity).
The car lift can carry out the following movements: The car lift is supplied with the hydraulic drive from the gear pump NSh-14G-3 of the right rotation put in action by the automobile engine through the box of selection of power (BSP). Inclusion of KOHM is carried out by means of the handle removed through a floor in the driver's cabin.
Supply of working liquid to the hydraulic equipment located on a rotary frame and an arrow, and also communication between electric equipment of not rotary and rotary parts of the car lift are executed through the central masloperekhod and a slip ring.
Installation of the car lift on portable support is made from the earth. Management of the movements of an arrow is possible both from an operator console on a rotary frame, and from a cradle.
The main hydraulic drive of movements of executive bodies is duplicated by the manual drive that allows to carry out emergency lowering of a cradle at refusal of a hydraulic system or the engine.
Safety of work on the car lift is ensured by existence of special system of electrohydraulic blocking (the mechanism of restriction of the zone of service) making automatic switching off of any maneuver at a cradle exit from a service zone (the safe field of movements).
Except the above-named devices and security systems, the car lift is equipped also with devices:
Contact the seller
Car lift telescopic AP-14