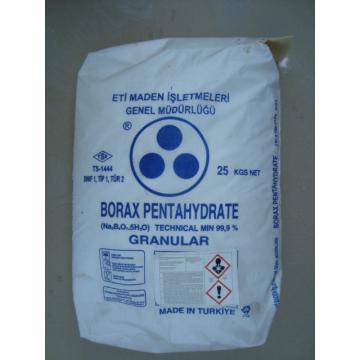 62% of positive reviews from 42
9
9 years on Allbiz
Description
By production of enamels and glazes of the drill it is used as boron oxide source. Enters into composition of glazes and enamels as inorganic binding. The additive of boron oxide reduces melting temperature, suppresses cracking. Control of the content of boron oxide in technology process allows to reach identical temperature expansion coefficients of glaze and the material covered by it that provides mechanical strength, wear resistance, water tightness, resistance to aggressive environments of final product.
Borax and boric acid are used as boron oxide sources - the antioxygenic agent. Mix of borax and boric acid are widely used as gumboils. For prevention of oxidation of surface of metal at hot working, for example at the soldering of pipes, protective gumboils on the basis of borates are used. At high temperature boron oxide dissolves oxides (for example, calcium oxide or gland). Use of borates improves physical and chemical characteristics of alloys and staly.
In the course of processing of gold ore borax anhydrous is used mainly. Borax role when processing gold ore: reduces molten viscosity, dissolves impurity and protects from oxidation. Effect of use of borax anhydrous - gold gain in yield, improvement of quality of the received ingots.
Borax is actively used by production, antifreeze, lubricating and brake fluids since forms with iron on metal surface the complex connection playing role of protective barrier from corrosion. Besides, in the presence of borax organic compounds which can be formed at high temperatures as a result of decomposition are neutralized. Use of borax is more preferable, than use of silicon compounds since it does not form gels and adsorbs water, preventing obstruction and emergence of vials of gas in system. When using borates lubricating property, thermal values and other consumer qualities of finished product improves.
By production of ecocotton wool, chipboard, glues, and also at wood impregnation borates are used as fire-retarding agent and antiseptic agent. Glues on the basis of casein and dextrin at introduction of borates improve consumer qualities: glutinosity amplifies, durability, flowability increases at low temperatures, etc. Borates improve warm and sound-proof characteristics of ecocotton wool. In construction of the drill it is used as the decelerator of corrosion of metalwork.
Borax is initial component by production of sodium perborate - the main oxygen-containing bleaching agent in powdery synthetic detergents. For improvement of the cleaning qualities, maintenance of the necessary acidity, viscosity, giving of ability to formation of emulsion of the drill joins in structure of many industrial and household cleaners, polishes, natirok.
Similar company products
Contact the seller
Borax 5 water