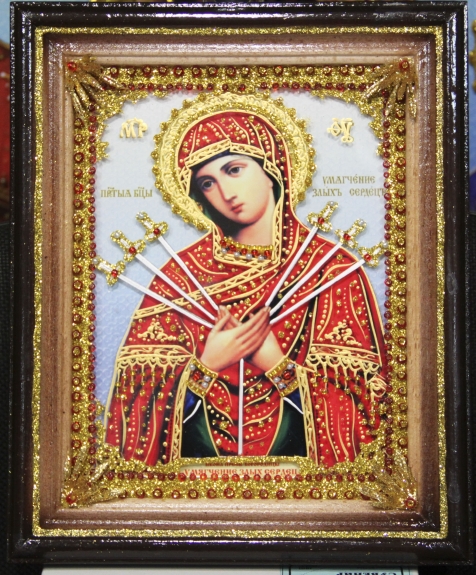 Blessed Virgin Mary's icon (Cherkasy), the Virgin Umileniye's icon to buy an icon of the Virgin, an icon of Saints, to buy icons, production of icons.

In stock
Price:
4.38 EUR
Hudozhestvennaya masterskaya Sergeya Shubina, ChP
Ukraine, Cherkassy
(View map)
+380
Display phones
Call
Technical characteristics
Description
The temple icon is richer, more difficult and more, but it not the main thing that distinguishes it from "wordly" analog. Placed in the temple, the icon becomes part of the special system of signs bearing huge symbolical loading. In this value it is similar to a mosaic fragment which is on the place and, carrying out a certain function, follows a common goal. Some icons, such as analoyny and portable, play a role in the course of church service that defines an iconography and technology of their execution. Others, including iconostasis, zaaltarny and kiotny an image, make art and symbolical registration of the temple.
On an icon Softening of evil hearts ("Semistrelnaya") Blessed Virgin Mary is represented pierced with seven arrows. Long time it was on turn of a ladder of a belltower of church in honor of the apostle John the Evangelist (near Vologda). The icon turned by a face down was taken for an ordinary board on which went, there was no vision weakened in the city of Kadnikov that he will receive healing after a prayer before this icon yet. Before the found icon served a prayer then the patient recovered. Especially the icon in 1830 during the cholera raging in Vologda became famous.
Before Blessed Virgin Mary's icon of "Semistrelnaya", or "Softening of evil hearts" lamenesses and the relaxations, about a pacification conflicting and about softening of evil hearts pray for healing from cholera, at hostility or persecutions.

Blessed Virgin Mary's icon (Cherkasy), the Virgin Umileniye's icon to buy an icon of the Virgin, an icon of Saints, to buy icons, production of icons.

Contact the seller
Blessed Virgin Mary's icon (Cherkasy), the Virgin Umileniye's icon to buy an icon of the Virgin, an icon of Saints, to buy icons, production of icons.