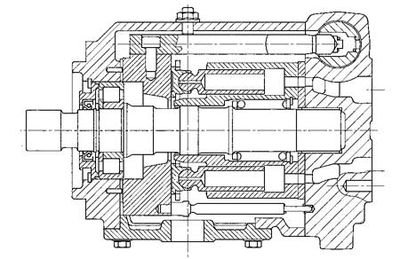 Number of axial and piston reverse, non-regulated hydromotors of the series "M" with inclined disk, are intended for hydraulic actuators with the opened and closed flow. They integrate reliability and safety of work with the broad range of changeable operating conditions: they can work at very low rotating speed and maintain the highest values of constant torque. Thanks to small dimensions and free configuration hydromotors are effectively used in limited space or are installed in provisions where it is impossible to use traditional mechanical transmissions. Hydromotors allow to apply them with connection of pipelines with side or behind, and also provide accession of different options of execution of such valves such as: make-up (anti-cavitational), flushing (cleaning) and pressure head. Shaft speed of the hydromotor is usually proportional to RZh expense range on entrance. The output torsion torque is proportional to pressure difference between the bringing high and low pressure at the exit in hydraulic system.

Hydromotors of series M make with castellated or spline shaft; they can be completed with such hydrodevices as: safety, anti-cavitational, return valves with the logical function "and", "or", and also the valve of shuttle type with centering spring for washing and heat exchange of working fluid between hydrolines in hydraulic actuator with the closed flow.