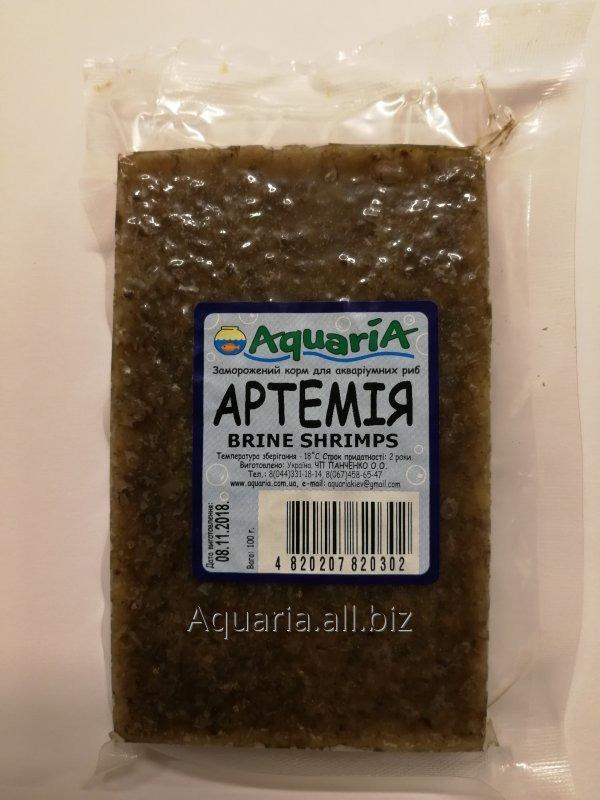 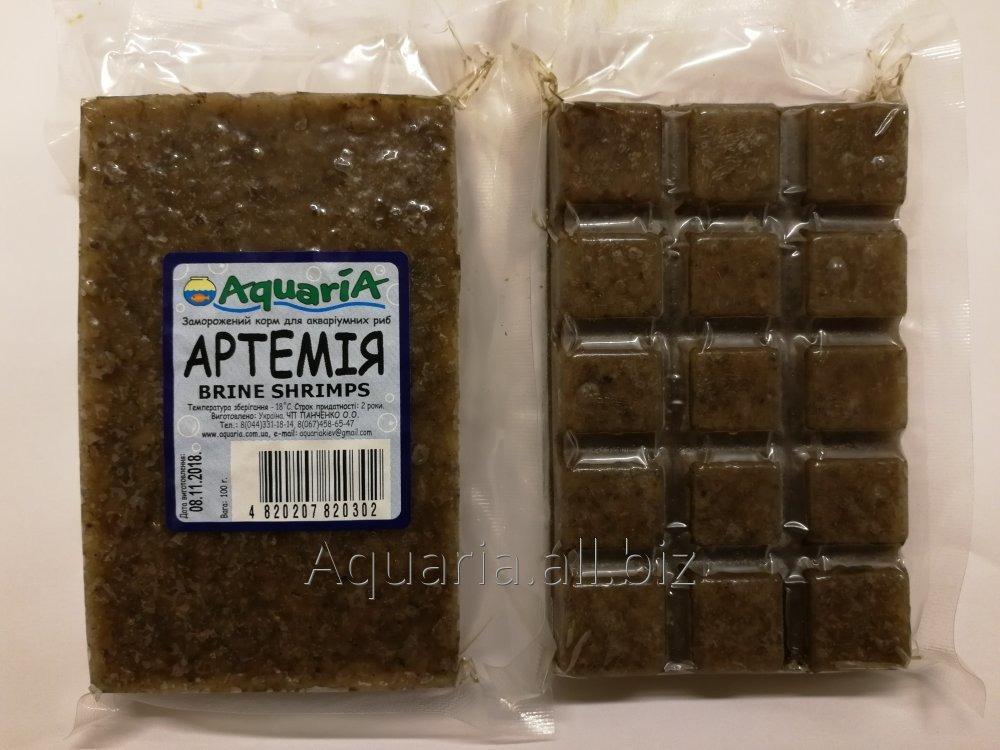 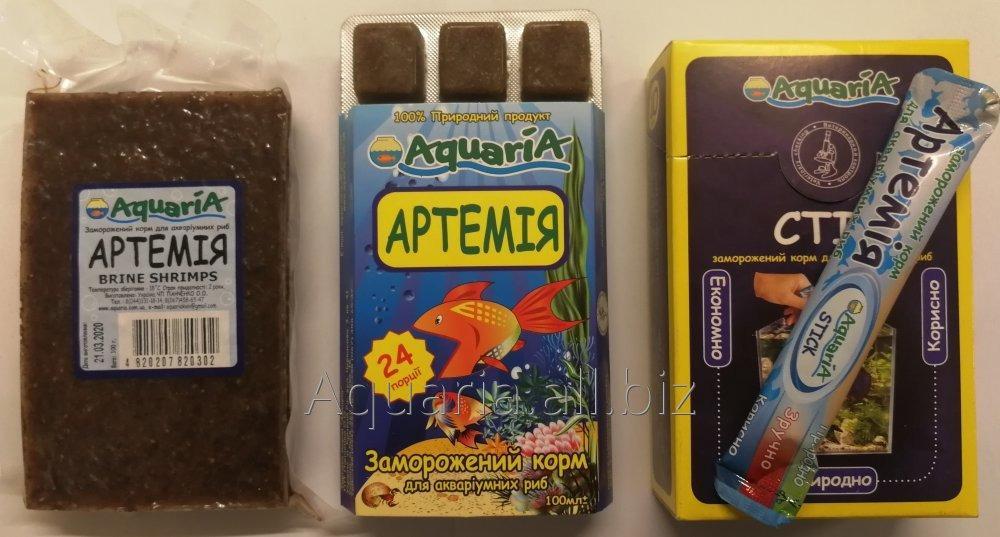 ARTEMY
The bred crustaceans usual Artemy - a highly nourishing forage for the majority of adult fishes and their posterity. Yields especially good results at cultivation of whitebaits of Artemy together with a red Cyclops. Also this forage is applied to the majority of sea fishes.

Artemy treats type Arthropods (Arthropoda), to a subtype Zhabrodyshashchy (Branchiata), to a class Cancroid (Crustacea), to a subclass Zhabronogy cancroid (Branchiopoda), to group of Zhabronogi (Anostraca), Arterniidae family and the sort Artemia. This sort consists of seven identified diclinous types: 1.Artemia tunisiana (Europe and North Africa); 2.Artemia species (America, part of Europe Asia); 3.Artemia franciscana (America, part of Europe); 4.Artemia parthenogenetica (Europe, Africa, Asia, Australia); 5.Artemia sinica (Central Asia, China); 6.Artemia persimilis (Argentina); 7.Artemia urmiana (Iran) and group of subspecies of these types Artemia gracilis; Artemia tibetiana; Artemia monica Verrill etc. Popular identification local Artemy as Artemia salina is incorrect. Due to the disappearance of the place of its dwelling (the lake Livington in England) this look is declared by died out and is identical to a type of Artemia tunisiana. The ambiguity in identification of domestic types often arises because of appearance change Artemy depending on conditions of its dwelling. Most likely, at us it is possible to find subspecies of Artemia species, Artemia parthenogenetica and Artemia tunisiana. The main habitats in Ukraine it is the Odessa and Crimean estuaries, occasionally meets in solonovodny lakes of other regions. Coloring depending on the consumed food and concentration of the oxygen dissolved in water varies from greenish to bright red. Its size fluctuates from 1 to 1,5sm. The body of a crustacean, consists of departments and is divided on head, chest, belly and tail. On the head two big sitting on small stalks difficult eyes, a small nauplialny eye, antennas and oral parts are located. In chest department of 11 segments, everyone with couple listoobrazno expanded legs. Legs have on an outer edge three external appendages (carry out function of gills), and on inside – on five internal appendages with shchetinka (carry out swimming functions, and also ottsezhivat food particles). In belly department – 8 segments without extremities. The first two segments are merged in uniform sexual on which the female has a vyvodkovy chamber, and at a male – sovokupitelny body. The tail department consists of two extended chlenik with shchetinka. Artemy Razdelnopoly. Males more small than females. Externally males it is easy to distinguish on the characteristic kryukovidny bodies of capture which are formed of antennas of head part of a body, and females — on absence them and to existence of a vyvodkovy chamber. Natural position of a crustacean at the movement in the thickness of water - belly part up. Crustaceans eat microseaweed, and also bacteria, the elementary and detrity. A way of food - a filtration. Crustaceans do not possess ability to selectively take and swallow only food particles. Therefore if in water there is a suspension of sand and food particles, both those, and others are swallowed. At a lack of plankton crustaceans should vzmuchivat ground silt. It is not exacting Artemy to the content in water of oxygen which deficiency in salty reservoirs – at all not a rarity. She lives in chloride, sulphatic and carbonate waters, salinity in some of them reaches 300 grams of salts on 1 liter of water. In some reservoirs of Artemy is the only representative of fauna as no other living creatures can live in such conditions. Artemy – a thermophilic summer form. Optimum temperature for an active phase of her life of 25 - 28 °C. At fall of temperature its vital processes are slowed down, and at a temperature less than 5 °C she, as a rule, perishes. Puberty Artemy is reached in 18 — 30 days. Fertility of a female from 50 to 250 eggs, a dung - each 5 - 7 days, during their life happens 15 - 18. Reproduction Artemy as diclinous, so parthenogenetic (that is males do not take part in reproduction). The female lays eggs in vyvodkovy chambers. Under normal conditions, development of eggs completely proceeds in these chambers, and from them naupliya are born. If conditions of dwelling worsen, then the female vymetyvat eggs - tsist. These eggs (tsist) Artemy differ in more dense cover and unusual resilience. They transfer full drying, freezing, sharp temperature drops and at the same time can keep the viability within 3 - 4 years. Together with wind of egg (tsist) can be transferred from a reservoir to a reservoir. At establishment of favorable conditions from eggs (tsist) naupliya Artemy are pecked out. When iaupliya are finally exempted from the egg - shell and membranes enveloping their body, they begin to move actively. Average length just vyklyunuvshikhsya naupliy - 0,45 mm, weight - 0,01 mg, color - from light pink to bright red.
In Artemy's aquarium husbandry found application as fodder object in all 3 stages of the life cycle:
1. Artemy - a fine forage for adult fishes of the majority of types.
2. Egg - Artemy in decapsulated (with the removed protective cover) a look a high - protein forage for whitebaits and species of fish, small by the size.
3. Naupliya Artemy – for thresh an excellent starting forage tsikhlid and other species of aquarian fishes