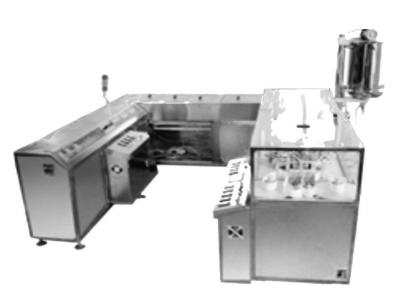 The automatic transfer line for production of suppositories

The high-tech automatic transfer line of the SK series - U for production of suppositories in the pharmaceutical and cosmetology industry. Full compliance to the GMP standards.

Tekhprotsess:podacha of a film - forming of cells - a dosage - cooling - a zapayka - cutting.

Giving of a film: gas station of a film from two reels on two horizontal rotors with giving in the mechanism of forming of cells.

Dosing: the heated product fence bunker - the pump of giving (circulation) of material - the quick-detachable doser with several heads.

Cooling: depending on model it is completed with the linear or spiral unit. At linear cooling the tape with cells is cut off at a certain length, for spiral cooling the continuous belt with cells.

Zapayka and cutting: after cooling the tape comes to a zapayka from above - drawing serial number and notch between cells. After a zapayka the tape from the lower party is cut off. By a rotor knife it is cut off bark from above and at the exit scissors cut a tape on plates with the appointed cells of suppositories.

The line is completed with the cooling cooler. Additional equipment - an indiviualny form - a press for production of the formed tape with cells like bullet, a torpedo and utkonosik.

Material for the blister - a film of PVC, PVC/POLYETHYLENE and a composite alyuminevy foil.

PLC control system - the controller and the frequency converter. Automatic diagnostics of production, removal of the rejected suppositories.