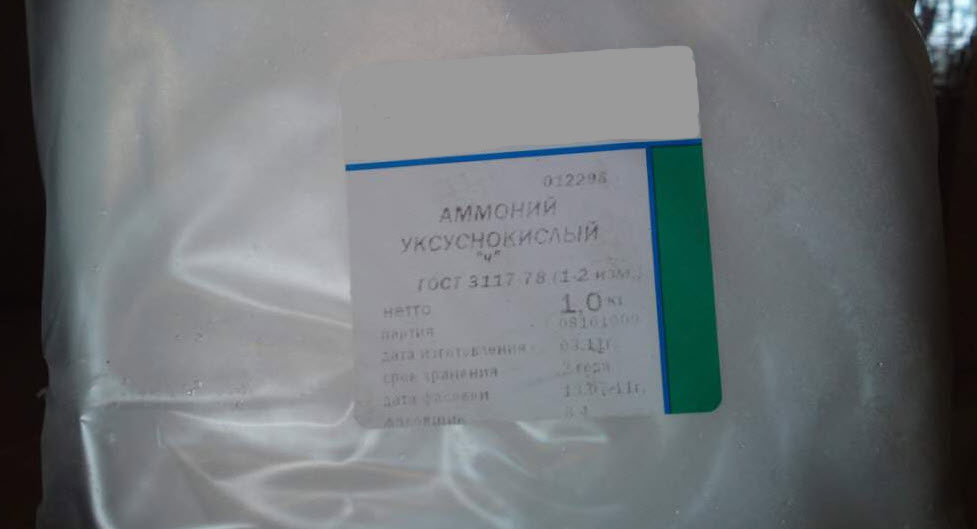 
Ammonium acetate (ammonium acetate) - the colourless crystalline mass consisting of extremely hydroscopic kristallik in the form of needles. At temperature more than 144 °C, the reactant decays with formation of acetamide:
NH4CH3COO = CH3CONH2 + N2ob
In water it is dissolved extremely easily (58,6% at 4 °C), we will dissolve in ethyl alcohol.

Receiving
Ammonium acetate (Ammonium acetate) - chemical compound with structure of NH4C2H3O2, can be received at reaction of acetic acid with ammonium. In vitro ammonium acetate can be received as follows: when cooling with water and vigorous hashing add 10% NH4OH solution to 80% CH3COOH until liquid it becomes strong to smell of ammonia. Solution is filtered if it is necessary, and evaporated on water bath before emergence of film of crystals. The dropped-out crystals suck away on Buchner filter and at once place in densely closed to bank.

Application
Ammonium acetate (ammonium acetate) is easily available, rather cheap and is widely applied
• in analytical chemistry,
• in organic synthesis,
• as component of buffer solutions,
• as pickle when dyeing wool;
• as medicine;
• in the food industry, as preservative, food additive, etc.
Similar company products
Contact the seller
Ammonium acetate