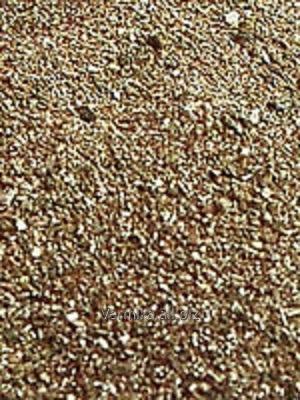 Vermiculite is a mineral from group of micromicas of a layered structure, the grains of lamellar structure having yellow, golden or brown color. Vspuchenny vermiculite is received roasting of a mineral of vermiculite when heating to 1000 C then it is stratified on worm-shaped particles, distends and increases in volume at 15-20 times.

Vspuchenny vermiculite - loose, fluid (that allows to fill emptiness of irregular shape), porous, friable, light, durable material. It is fire-resistant: temperature of melting 1350'C, application temperature - from minus 260 to 1200'C. Possesses the warm and soundproofing properties, the high absorbing ability: it is capable to absorb liquids to 500% of a body weight. At the same time it is poorly hygroscopic (that is poorly absorbs moisture from air): humidity of vermiculite at 100% of humidity of air - about 10%. It is biologically resistant: it is not subject to decomposition and rotting under the influence of microorganisms, is not the favorable environment for insects and rodents. It is chemically inert: it is neutral to effect of alkalis and acids. Vermiculite is environmentally friendly and sterile material, is not toxic, does not contain heavy metallov.rn - 7.0, neutral.

1. Vermiculite small (to 1 mm) fractions is used in pure form or as a part of light mixes (for example, with peat or sand in the ratio 1:1) for a prorashchivaniye of seeds and rooting of shanks. Before application vermiculite needs to be moistened. The seedling on vermiculite is protected from fungal diseases (a root gnily, black leg).

2. In order that seeds were evenly distributed on a soil surface, mix them with small vermiculite. They can powder seeds after crops for protection against a mold and drying.

3. Use of vermiculite as a substratum component (to 40%) allows to improve characteristics of landing mix considerably.

Porosity and friability increases, so, air permeability, is prevented caking, a komkovaniye, consolidation, hardening of the soil, formation of a superficial crust. Roots evenly develop on all earth lump.

Except conditioning of the soil vermiculite protects root system from external temperature drops. The substratum with vermiculite is less cooled in cold time and does not overheat during the hot periods, daily fluctuations of temperature smooth out.

Water and solutions of nutrients are absorbed by vermiculite (100 grams of vermiculite can choose up to 500 ml of water) and gradually given to a plant. Reduction of number of waterings, economy of water (losses of water from evaporation and a drainage decrease) is reached and fertilizers (are not washed away). Rotting of roots because of excess watering and stagnation of water is prevented.

Use of vermiculite loses the gross weight of land mix that is the most actual for krupnomer.

4. Vermiculite is used in pure form or as a substratum component at hydroponic cultivation of plants on nutritious solutions

6. Vermiculite can be considered as the supplier of nutrients: potassium, magnesium, calcium. However, small quantities of elements and, perhaps, their difficult availability to a plant, will not allow to refuse fertilizers completely.

Vermiculite has high ion-exchange ability and holds positively charged ions of potassium, magnesium and other elements of fertilizers, gradually giving them to a plant.

The vermiculite used for rooting of shanks, cultivation of seedling and storage of landing material can be applied repeatedly: for room floriculture - after calcinating, for entering into an open ground - without preliminary processing.

1. Semyon Derzhatvo damp vermiculite until arise, then is landed in an open ground.

2. Entering of vermiculite into the soil allows to improve its structure considerably: to increase aeration properties of heavy clay soils, to increase a moisture capacity of easy sandy soils.

At the expense of a neutral indicator rn vermiculite allows to reduce several acidity of the soil and to slow down soil salinization processes.

Bogging of soils as a result of long rains and floods, and also active development of mosses and hygrophilous weeds on low-lying sites is prevented.

Excessively introduced fertilizers are absorbed and gradually given to plants.

Due to low heat conductivity of vermiculite the vymerzaniye of root system during the early-spring period (is prevented at disembarkation of seedling) and when wintering plants in an open ground (with use of ukryvny materials).

Norms of introduction: at disembarkation of seedling of vegetable, berry and flower cultures in an open ground - 0,5-2 glasses on a hole, when landing saplings of trees and bushes of fruit, berry, decorative crops - 3 liters on a hole.

3. Cleaning of soils (through absorption) from radionuclides, heavy metals, with their transfer to forms, inaccessible for plants, that is especially important on the sites located in industrial zones near automobile routes and the railroads.

The harvest is put layer-by-layer, without mutual touch, pouring vermiculite layers up to 5 cm.

5. Vermiculite of fractions of 4-8 mm is used for a mulchirovaniye of pristvolny circles of fruit-trees (6-10 l on 1 sq.m), yagodgy bushes (5 l on 1 sq.m), flower bushes (2-3 l on 1 sq.m). Vermiculite is added to the soil which is dug over around a plant with easy seal in soil.

1. Vermiculite allows to facilitate care of lawns and lawns. Entering of vspuchenny vermiculite into the soil before crops of seeds (the consumption of vermiculite of fractions of 2-3 mm makes 5 l on 1 sq.m) will protect lawns from flooding or drying.

Also composts for lawns - the mixes of seeds of herbs, vermiculite and fertilizers providing uniform distribution of seeds and their active germination are used.

2. The sterile and biostable environment for storage and transportation to the place of consumption or sale of vegetables, fruit, landing material.

3. Small fractions of vermiculite are applied to capsulation and pelleting of seeds, i.e. creation around a seed of a protective nutritious cover that raises periods of storage of seeds and their viability, provides more uniform seeding of small seeds.

4. It is applied in animal husbandry and poultry farming.

Advantages of perlite before vermiculite: capillary distribution of moisture, gives water to a plant easier, quickly dries out between waterings. The expiration date and effects of vermiculite is not limited and caused by safety of its structure.